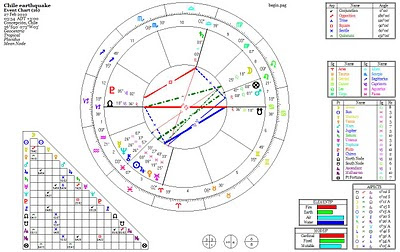 A strange thing happened to me last week: At 4am on the 25th of February, the night of a Sun-Jupiter conjunction in Pisces, I woke up from a deep slumber and couldn’t go back to sleep! What is strange is that a colleague had complained of the same thing happening to her the previous night. When I spoke to other people, many of my family and friends appear to have suffered from the same phenomenon. Some complained of having weird dreams, nightmares even. Something told me that this had to be significant, and possibly linked to some type of a global phenomenon or event, though what it might be, I wasn’t sure. My immediate instinct as an astrologer was to look at the transits of that night.

At the time, all that I was aware of was the fact that the Moon was waxing toward Full (which would take place in Virgo) and that a Sun-Jupiter conjunction in Pisces was also in orb and in the process of perfecting. When I cast a general planetary transit chart for my local time zone (GMT or UTC) the Ascendant of the chart happened to fall at 1 degree Capricorn, which was slap bang on top of my natal Jupiter (i.e. the precise degree), and within 3 degrees of where Pluto is currently residing (4 degrees Capricorn) which was sort of weird. The last time I had really bad insomnia was around the time of the Jupiter-Pluto conjunction in Dec 2007 (11 Dec 2007 21:15 GMT) when both planets were at 28 degrees of Sagittarius. As I mentioned in my last post, this ushered in the beginning of my Pluto square Pluto transit – one of the major mid-life transits and often involves some sort of encounter with death or a sense of one’s on mortality….

At any rate, not to digress too much, but the previous day I had been chatting to the same colleague with the insomnia problem and she happened to mention that she and my boss had a similar problem in the summer of 2007 which went on into the autumn. I knew that my boss had Moon in Scorpio (as I do) and that this colleague has Scorpio rising, both of which are ruled by Pluto, the planetoid that many astrologers have associated with the current world recession since its ingress into Capricorn, and so I wondered if this somehow was connected. More on this later…

The other interesting thing to come out of the Insomnia chart was the degree and placement of the Moon – close to its south node at 17 degrees of Cancer. The Moon rules Cancer, so this is a strong sign for it to be in. Furthermore, this position of the Moon happened to be conjunct my natal south node at 21 degrees of Cancer in the 12th house – a house I would associate with dreams and sleep, as well as the unconscious mind, and the ‘collective unconscious’ amongst other things. Perhaps, due to synchronous planetary alignments, I had somehow unconsciously ‘tuned in’ to some global event that was brewing?…

A few days later, of course, the Chile earthquake occurred, one day away from the Full Moon, and on the same day as the Sun-Jupiter conjunction in Pisces. This Full Moon was interesting in that it happened to be what is known as a ‘Super Moon’, which, according to astrologer, Richard Nolle, is:

‘a perigee-syzygy, a new or full moon (syzygy) which occurs when the Moon is at 90% or greater of its mean closest approach to Earth(perigee).’

From a physics point of view, this is sure to exert a stronger gravitational pull than say, a Full Moon which takes place in apart of the Moon’s orbit that is further away from the earth. Interestingly, Jim Berkland, a retired geologist for Santa Clara County, has been using the position of the Moon’s orbit in relation to the earth for year to try and predict earthquakes. See his website: www.syzygyjob.com.

According to Wikipedia, Jim ‘also considers strange animal behavior, such as the number of ads in newspapers for lost or runaway pets, as well as the mass beaching of whales and dolphins’ [to make earthquake predictions.] He attributes the strange behaviors to radical changes in the Earth’s magnetic field just prior to earthquakes and in the general area of the quakes. He says that, when these changes occur, they interfere with the sea mammals’, and even the migratory birds’, ability to navigate, which explains the mass beachings. He says even dogs and cats can sense the disruptions, which explains elevated rates of runaway-pet reports. Research on Earth’s magnetic field, and how it is affected by moving tectonic plates and earthquakes, is ongoing.’

Naturally, this interested me from the point of view of my own experience (and that of at least 8 ther peopel that I was aware of) and because the recent earthquake in Haiti happened to take place very near to the New Moon on the 15th of January 2010, which also happened to be a solar eclipse! This not only involves the Sun and the Moon but also suggests a possible connection to the lunar nodes. As it happens, there are currently theories out there involving a possible relationship between the lunar nodes and earthquakes.

For those who aren’t familiar with astrology, the nodes are the positions where the paths of the Moon and the Sun (ecliptic) cross and are therefore the places where eclipses usually take place. Although they are referred to as the Moon’s nodes, they actually refer to a sol-lunar relationship i.e. that between the Sun & Moon, as the astrologer Dane Rudyar so insightfully pointed out in his book ‘The Lunation Cycle.’ Here he writes that:

‘The cycle of the phases of the moon….does not reveal its basic meaning unless it is made clear that what the lunation cycle measures is not changes to the moon herself, but changes in the soli-lunar relationship.’ (p. 17)

That both can exert some physical gravitational pull on the earth is made clear from the phenomenon of Spring Tides, which involve a phenomenon called syzygy. According to Wikipedia,

‘Around new and full moon when the Sun, Moon and Earth form a line (a condition known as syzygy), the tidal force due to the Sun reinforces that due to the Moon. The tide’s range is then at its maximum: this is called the spring tide.’

Getting back to the Nodes, a study published in Natural Hazards, a scientific journal, in 2001 by Hui & Xiaoming concluded that:

‘Major earthquakes in the world, especially the ones above magnitude 7.0 are affected by the positions of celestial objects. The node of the lunar orbit with the earth’s orbit moves westwards on the ecliptic, with a period of 18.6 years. The precession of the lunar ascending node causes the inclination between the moon’s path and the celestial equator to change continuously from 18.28° to 28.58°. The seismic activities of the main seismic belts in the world are affected by the period of 18.6 years and only their active periods appear alternately, which shows that different locations of the moon correspond to different seismic belts or regions on the earth.’

This appears to be backed up by David McMinn, an astrologer and minerals economist, who conducted a study of the frequency of earthquakes in various regions around the world in relation to the cycle of the lunar nodes, the north node in particular, with some interesting findings. Currently he is focuses on the soli-lunar cycle and the financial markets, with some interesting results, including a link between the timing of earthquakes and the 56 year cycle of the lunar nodes.

Bu does any of this have an astrological significance in terms of a) my experience and b) the Chile earthquake?

Firstly, when I cast a chart for the Chile event (see above) the North Node happened to be EXACTLY conjunct the Ascendant of the chart, making the nodal axis fall across the horizon of the chart, i.e. the AS-DS axis, which seemed significant. Furthermore, Pluto happened to be in the same sign as the North Node (at 5 degrees of Capricorn for that longitude) which is currently at 18 degrees Capricorn. It is also located in the 12th house, the house which I earlier associated with dreams, sleep etc and the place were my natal south node is located.

SECONDLY, the current nodal axis happens to be very close to my NATAL nodal axis (21 degrees of Cancer and Capricorn.) Coincidence?

One thought on “Insomnia, the Moon, the Chile Quake…”

This site uses Akismet to reduce spam. Learn how your comment data is processed.