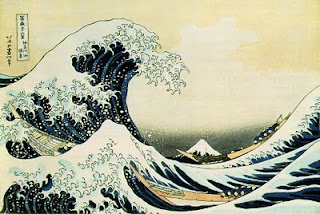 Throughout the Japanese quake ordeal, this image kept coming into my mind…

It is a woodcut by the Japanese artist, Katsushika Hokusai called “The Great Wave at Kanagawa.” Some have interpreted this to be a depiction of a tsunami, although others beg to differ. Take this write-up from Wikipedia as an example:

“Behind the Great Wave at Kanagawa” (神奈川沖波裏), from 36 Views of Mount Fuji, Color woodcut, 10 x 15 in; Metropolitan Museum of Art, New York. Although it is often used in tsunami literature, there is no reason to suspect that Hokusai intended it to be interpreted in that way. The waves in this work are sometimes mistakenly referred to as tsunami (津波), but they are more accurately called okinami (沖波), great off-shore waves.”

It now hangs in the Metropolitan Museum of Art. Below is their interpretation of it:

The Great Wave at Kanagawa (from a Series of Thirty-Six Views of Mount Fuji), Edo period (1615–1868), ca. 1831–33
Katsushika Hokusai (Japanese, 1760–1849); Published by Eijudo
Polychrome ink and color on paper
The preeminence of this print—said to have inspired both Debussy’s La Mer and Rilke’s Der Berg—can be attributed, in addition to its sheer graphic beauty, to the compelling force of the contrast between the wave and the mountain. The turbulent wave seems to tower above the viewer, whereas the tiny stable pyramid of Mount Fuji sits in the distance. The eternal mountain is envisioned in a single moment frozen in time. Hokusai characteristically cast a traditional theme in a novel interpretation. In the traditional meisho-e (scene of a famous place), Mount Fuji was always the focus of the composition. Hokusai inventively inverted this formula and positioned a small Mount Fuji within the midst of a thundering seascape. Foundering among the great waves are three boats thought to be barges conveying fish from the southern islands of Edo. Thus a scene of everyday labor is grafted onto the seascape view of the mountain.

Perhaps a graphic depiction of the water element ‘eclipsing’ or becoming stronger than that of earth – an elemental imbalance?
I still think it is odd that this image seems to have seeped into the collective consciousness of many people of my generation in recent years. A former colleague of mine introduced me to it a few years ago – in fact, within a few months of September the 11th 2001 – when talking about Japanese architecture. More recently, a colleague of mine pinned this image up on her pinboard at work. Around September 2010, she was struck down by a mysterious illness involving epileptic-like fits that is still not fully diagnosed…and she never came back to work…I wonder what made her choose it?
Hmm…

This site uses Akismet to reduce spam. Learn how your comment data is processed.